A Dream is a Wish Your Heart Makes: A Night with American Girl at Starlight 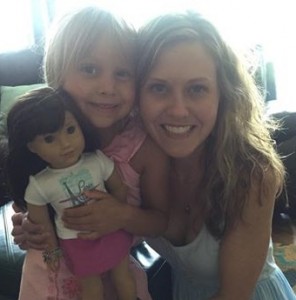 My daughter, Elyse, turns six next month and has had her eye on the Doll of the Year, Grace Thomas, from American Girl. That is a slight under exaggeration since she daily flips through the American Girl catalog. I decided to surprise her with Grace as an early birthday present and take her to Starlight Theatre with the American Girl to see "Cinderella." She was beyond thrilled! Dressed in their matching outfits we headed to the American Girl store where Grace was treated to a royal hair do and a tiara at the salon. Elyse then posed her Grace with one of the Samantha dolls on display for a photo since her friend has that doll and the dolls are “friends.” Then we headed over to Barnes and Noble to grab a snack before the bus arrived. As we boarded the bus Elyse was handed a goodie bag with a magazine, a pumpkin craft and a couple articles of clothes for her doll. She was most excited about the sequined buret because it’s what painters wear and Elyse wants to be an artist and fashion designer when she grows up. When I shared with her that Grace likes Paris, the fashion capital of the world, Elyse squealed with excitement and said she and Grace wanted to go with daddy on one of his business trips to Paris. I smiled at the thought and realized that my little girl has an amazing zest for life and big dreams. 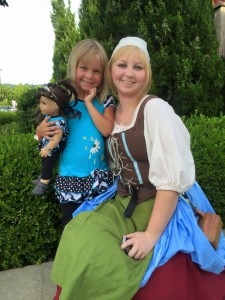 On the bus ride there we made movies on my phone of her interviewing Grace about the show. Once we arrived at Starlight Theater we headed to the fairytale festival before dinner and the show. She met Cinderella, but was most mesmerized by the man on the seat in the dunk tank. While most of the other girls stood in line to get their faces painted she spent most of our time throwing balls at the dunk tank target. She had three tries and then would go to the back of the line to try again. Each time she got closer to hitting the target, but never did dunk the taunting man on the seat. Her good spirited persistence was admirable and she enjoyed a few laughs when others got him dunked. 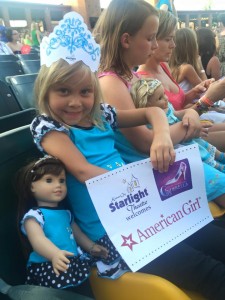 We enjoyed a buffet dinner by Paradise Diner and then went to find our seats for the show. Good thing we were seated on the end of the row because Elyse barely sat in her seat. Instead she danced her heart out to the music and singing. She was hamming it up when she realized she was getting an audience of her own. She had some dance moves that I had never seen before. I’m guessing she learned those at drama camp the week before. When the night ended the American Girl staff said good bye to Elyse by name and one of them said they expect to see her on the stage someday. I don’t doubt it and I am so glad that she has the opportunity to see theater productions and play with dolls that have inspiring stories and dreams as big as my little girl. Little does Elyse know yet how much she and her new doll are alike. She will learn that as we read Grace’s book together and I hope it inspires her even more to follow her lofty dreams. Elyse undeniably has a flair for the arts especially performing and I’m excited to see how her passion for drama, dancing and singing will transpire as she grows older. And who knows maybe she will be a fashion designer in Paris one day! I will always encourage my little one to dream big. Learn about more special events you can experience with American Girl now. ~Donna